Historical perspective of The Senate Around the world

Muhammad Haris April 7, 2022 Education Comments Off on Historical perspective of The Senate Around the world 203 Views

Senate is known to be the upper house for many developed and underdeveloped countries. In Pakistan, it was first introduced in 1973 constitution through article 59 as a bicameral legislature form of government. After fall of Dhaka it was evident that Unicameral legislature is not working In Pakistan. Habib ullah Khan became the first chairman of senate in 1973. All the senators are selected by secret ballot single transferable vote procedure through each provincial assembly, the same procedure applied in the national assembly for senators from the capital. It is assumed that parties will get their share of senators against their representation in the provincial and national assemblies but it is not the case in Pakistan.

Purpose of the Senate:

The main purpose of a senate is to eliminate the inequality between the provinces in the national assembly, that’s why the senate have equal representation from all provinces. It was determined that one from the many reasons behind fall of Dhaka was the unicameral legislature in which larger province had a complete authority over smaller provinces, which created significant differences, ultimately insecurities and miseries created through unicameral legislature led to creation of Bangladesh. So, when the constitution of 1973 were announced, bicameral legislature was introduced as the form of government to provide equal representation to all federating units in the upper house

Required qualification for the senate in Pakistan:

As per the article 62 of constitution, minimum age for senate is 30 years and citizenship of Pakistanis must for a person to be eligible for senate. The education requirement is not defined in constitution so any citizen can become Member of Parliament if they fulfill other requirements.

Since 1973, senate elections have always been a cause of commotion inside and outside the parliament. The party that loses the election always blame other parties for horse-trading and purchasing parliamentarian’s loyalty. Recently the government created a rift in the national assembly when their candidate lost a seat from the national assembly even though they had a majority for it.

In 2021 the ruling party tried to get senate elections done through the open ballot with the help of an ordinance but it was not supported by a firm logic or any article of the constitution. The government also tried to get it done through parliament but it was not supported by the opposition due to which all the government’s struggle went in vain.

The charter of democracy was signed between PPP and PMLN in 2006 in which article 27 is clearly states that senate elections shall be held through open ballot. But now these both countries are in opposition and they are not in the favor of open ballot as they decided mutually in 2006.

Article 186 of the constitution of Pakistan:

Under article 186 of the constitution, president can as for opinion of the Supreme Court on any question of law which considers public importance. The honorable Supreme Court gave an opinion it guides the election commission to conduct free and fair senate elections in a manner that has been provided by the constitution of Pakistan. It was also said that secrecy is not perpetual so ECP can use technology to stop horse trading in senate.

Article 226 of the constitution of Pakistan:

As per article 226 of the constitution, all elections shall be held through secret ballot except for the Prime minister and chief minister, which is to be done through a show of hands. It has been observed that the ruling party was failed to establish their arguments against the sanctity of vote which resulted in turmoil during the 2021 senate elections.

There are many examples worldwide for us to examine how our system is flawed against other operating systems in the world. Following below is a brief explanation about government systems of leading and neighboring countries.

China is the fasted growing economy and it holds the largest population in this entire world. It possess unicameral form of government. National People’s Congress (NPC) is parliamentary body of China and is a powerful organ of the state. Alongside it has a Standing committee of NPC for important decisions relates to selection of executive leadership. The tenure of NPC members is of 5 years. China has multitier electoral system which is a mixture of direct and indirect elections. Their hierarchical structure is as follows. 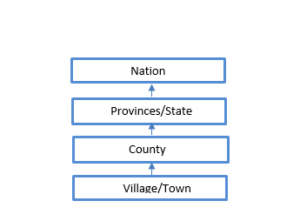 So it is a mixture of direct and indirect elections in a way that on the level of village and towns, members are elected through direct election through public votes. While as the hierarchy goes upwards, the selections becomes indirect with the help go members elected at village and town level. Similarly a person will reach at the national level by passing al staged of hierarchy.

The kingdom of Great Britain and Northern Ireland are collectively known as United Kingdom. It is parliament democracy with a constitutional monarch. As Queen is the head of state and Prime minister is the head of government. Its parliament structure is as follows.

In this legislation structure, lower house is known as house of common, where people are directly elected form constituencies for 5 years tenure. On the other hand, upper house is known as House of Lords, it has around 800 members of which 646 life peers are appointed by crown on the advice of Prime minister, while 25 are from bishops and 96 from hereditary peers. It is a legislation body with the responsibility of maintaining check and balance on workings of government.

United States of America is comprised of 50 states. It is the third most populated country in this world. Bicameral legislature is the form of government in the United States. Its legislative body known as US congress is composed of upper and lower house named as Senate and House of Representatives respectively.

India is the second-most populous country. It has a parliamentary form of government, comprises of the upper and lower house in the shape of a bicameral legislature. The upper house is named as Rajya Sabha while the lower house is named as Lok Sabha. The Lok Sabha currently have 545 members out of which 543 are directly elected through public voting, while 2 seats are for Anglo Indian. On the other hand, Rajya Sabha can hold a maximum of 250 members out of which 238 are selected through Provincial Assemblies MLA’s with a single transferable vote procedure, while the remaining 12 are selected on the advice of the president. Rajya Sabha currently have 233 elected members through MLA’s.

Though both houses in India are legislative bodies, Lok Sabha is more powerful in certain areas. Like all the decision making regarding money bill is the prerogative of Lok Sabha. Rajya Sabha can only recommend suggestions on it which are not compulsory for Lok Sabha to cater for.

Bangladesh has unicameral form of government. Its supreme legislative body is Jatiya Sangsad, also known as the House of the Nation. The parliament contain 350 members including 50 seats reserved for common. Other than reserved seats, members are elected through direct elections for the tenure of 5 years.

If the ruling party is genuinely interested in blocking the route of horse-trading and scrutinizing the flawed procedure of senate elections then it has to get viable and apposite legislations, it can only be done with the opposition on board as ruling does not have a 2/3 majority to neglect opposition in the legislation process. In this regard, there are some suggestions regarding senate elections in Pakistan that are accepted worldwide.

1- Proportional representation: As the purpose of the senate is to provide equal representation to provinces. So it can be done by allocating some seats in the senate to parties against their provincial assembly percentage. In this case, the need for conducting an election will eradicate and will reduce the expense of the taxpayer.

2- Pakistan can adopt the procedure of the single transferable vote method through public voting, the same as in Australia. In this case, the general audience will have the chance to select senators as per their preference.

3- As per the procedure of US senate elections, Pakistan can adopt the first past the voting method through public voting, similarly in this process general audience has the authority to choose their preferred candidate for senate.

4- Modern gadgets can be used to curb malpractice in senate elections.

In the end, it all depends on the intention of the ruling party, either they are honest in their struggle to get free and fair senate elections or it is just another political trick to pressurize the opposition. As per the law of attraction, your thoughts become your reality and in this case, the government can convert their benign proposals into reality by continuously engaging with the opposition and do appropriate legislation.

It is difficult to definitively rank the top 10 institutes in Pakistan, as there are …